If there’s one question I get asked more than any other, it’s “Why did you move to Canada?”

I always pause, wondering whether to give them the real answer or my politely constructed answer I reserve for when I don’t want to break it down.

The truth is for as long as I can remember I’ve always wanted to live abroad and I was open to many places, however Canada had a less vigorous process and fewer restrictions. Under the International Exchange Canada (IEC), also known as the Working Holiday Visa you can live and work in Canada for up to 2 years. If after 1 year you claim this land as your own forevermore, you can apply for Permanent Residency.

Whilst suppressing the urge to cry about turning 30, I told myself it was now or never to do something this selfish because perhaps this would be one of the last times in my life I wouldn’t have to take another person (or a mini person) into consideration.

Without hesitation, the next question that always follows is, “How are you enjoying Toronto”?

“Cold!” always gets a chuckle and it beats breaking down the very intricate experience of being a Londoner here, because having experienced 25 paid vacation days from work, the night tube (which runs 24 hours on weekends) and not having to file taxes has added an extra layer to living here. It’s a comparison only few can understand and can give a negative impression but the truth is, the 2 cities shouldn’t be compared. Toronto is great in its own way. I remember when I first explored Downtown and I would strain my neck looking up at the buildings. The Toronto skyline is beautiful! Every so often, I’m reminded of the scale of Canada, Toronto resides in a province called Ontario and I’ve been told you can drive for 24 hours straight and still be in Ontario!

I love the fact that I can go to the beach, the mountains, or even whale watching. Another thing is, the levels of creativity in this city are on a hundred. Street art is not just confined to alleyways but postboxes, shop fronts and whole sides of apartment blocks. I also love having earlier access to artists like H.E.R, JMSN & DVSN without waiting for a ‘European Tour’.

The thing I love most about Toronto is the way the city transforms between summer and winter. It’s like living in 2 different places. In that way it’s a city of extremes – toboggan down snow covered hills at Broadview Park in winter and get on your paddleboard at Toronto Islands in summer.

Let me tell you the height of summer is hot, hot, hot! Last summer got close to 40 Degrees Celsius with humidity. The vibe is so fun, ‘Patio Season’ is a real thing- after hibernating for months and sticking to subways and underground PATHS, almost every restaurant and bar opens a patio along the sides of the roads in summer. Also the annual Caribbean carnival ‘Caribana’ takes place early August and brings visitors from all over the world – it is not to be missed!

Having just celebrated a year of being here, I’ve witnessed 3 epics events in that time. First, I landed around the time the bill to legalise Weed across Canada was passed, Viola Desmond – the “Canadian Rosa Parks” became the first the first Canadian woman and first person to colour to grace the national currency. She has proudly been printed on the $10 bill. Last but not least, Toronto Raptors WON a NBA final for the first time in history. The city went wild each game, gathering in mass at Jurassic Park (a location to watch the games) and celebrating like crazy after. It’s truly been such a special time to live in Toronto. #WeTheNorth

If I could only say one thing to you, it would be that…if there is a lingering thought in your mind about wanting to do something, that is a calling and a desire far beyond you. The only way to appease it is to explore it; it’ll bring you peace, alignment, creativity and your future. Please, please, please do not stand in your own way because resources and opportunity will come but fear is by far the biggest obstacle to overcome.

There’s nothing I had that made this transition any easier for me than it would be for any other person. I had no family (that I knew of) before arriving, I didn’t come with anyone and I had only saved for a few months. I left my job and my flat, landed and figured it out. I networked my ass off to find my current job and still did 2 other jobs before that. Now I work for a major movie studio! I viewed basements of college students trying to make money on their empty room over the summer and a bunch of other funky spaces -and people- before finding my current place and I spent every waking moment Facetiming my best friend back home before finding friends that I can sit in silence around (because that’s when you know it’s real).

A year later the hardest things are the little things, guessing which way a door opens, or the light switches on/off or know exactly North, East, South & West.

If you want to find out more about moving to Toronto check out the Government of Canada website. When I moved and to this day my city bible is Narcity and BlogTo. There are so many forums and blogs detailing the process but you can always reach me on social on Instagram: @Runaway.bae and Youtube: Britsinth6. 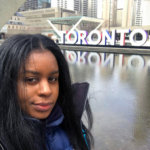 Making Hashish in The Moroccan Mountains