Sand. That is one of the first things that comes to my mind when I think of Senegal. You see, no matter where you go in the capital city, Dakar â€“ whether to one of the many beaches, a nearby island, on the highway, or even near government buildings or international organizations â€“ there is a chance that you will beÂ swimmingÂ walking on sandy streets. And if you want to make snow angels in sand dunes, you can travel not to far outside of Dakar toÂ Lac RoseÂ (Pink Lake) or closer to Senegalâ€™s former capital, Saint Louis, to Lompoul desert.

I traveled to Lompoul with my sister a couple months ago, and we survived camping in the desert and playing hopscotch on camelback. There are a couple campsites in Lompoul whose basic amenities include tents furnished with bed(s), full bathroom, and a nearby restaurant where one can purchase meals. We chose to stay atÂ Camp du DÃ©sert, because it had good reviews and was a bit cheaper than Lompoul EcoLodge.Jumia TravelÂ was having a discount, so we were able to pay 36,000 cFa for a double room, which also included breakfast and half-board (dinner).Â Camp du DÃ©sertÂ has a total of 14 basic tents, which are either single, double, and triple rooms with the single being the most expensive and the triple being the least expensive.

Since we arrived in the evening and were pretty worn out from our journey, we didnâ€™t do much that night. As I mentioned earlier, dinner was provided in our accommodation package, and it actually wasnâ€™t bad at all! First, they served an entrÃ©e of vegetable soup and baguette before bringing out the main course: couscous with baked chicken and a vegetable sauce that contained carrots, potatoes, and cabbage. For dessert, we had fresh fruit.Â After our meal, we joined other guests who were dancing around a bonfire to music played by local musicians. I shook what my mama didnâ€™t give me instead of allowing my food to digest. No regrets.

The next morning, it rained for a few hours, but thankfully it held up long enough for my sister and I to take a demi-tour of the sand dunes on camelback. We paid 3,000 cFa for the 15-minute tour instead of 6,000 cFa for the 30-minutes tour. Another popular option is to take a tour of the dunes in a caravan. This costs 35,000 cFa for 2.5 hours and includes a driver/tour guide who takes visitors across the dunes and all the way to the ocean. One has the option of stopping at the ocean for a quick swim for about 15 minutes before continuing on to the fishersâ€™ market and then heading back to the campsite.Â My sister and I opted simply for the camel ride, and we checked out later that day. For our return trip we took a private taxi that was recommended to us byÂ Camp du DÃ©sert; we paid 20,000 cFa each and arrived back to Dakar in about 3.5 hours.

If youâ€™ve traveled (or are planning a trip) to Lompoul desert, which booking site did you used, which mode of transportation did you use to get there, where did you stay, and which activities did you do? 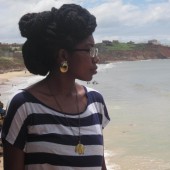 Chineme is a nomad who has lived on three continents. She uses her photos, her blog, and social medial to tell #herStory. Central themes include travel, black beauty / excellence, social justice, and music. You can follow her journey at TravelingWithChi.com & on social media at @chiStory_.

10 AMAZING AFRICAN MUSIC FESTIVALS YOU SHOULD NOT MISS